In honor of President Eisenhower’s 125th birthday this week, here is a timeline of his Presidency, highlighting ten of his most notable accomplishments. 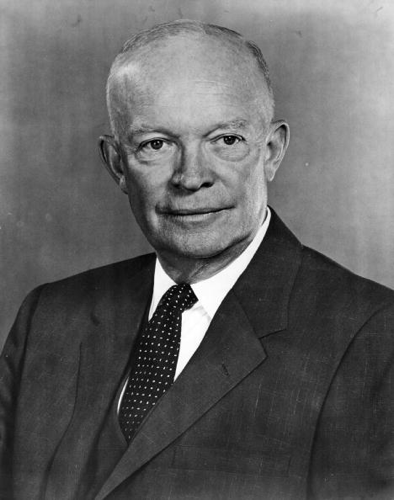 1953 – Led the negotiations to reach an armistice deal between North Korea and South Korea to end the war.

In order to keep a campaign promise, Eisenhower traveled to Korea on December 2, 1952. After visiting troops and being briefed on the matter, Ike made it a mission to reach an armistice through diplomatic negotiations and military muscle flexing.

On April 7, 1954, President Eisenhower gave one of his most famous press conferences, which detailed the significance of Vietnam to the United States. Towards the end of the speech he expressed concern that if Vietnam fell to Communism, then other countries in the area would, one by one, also fall victim, jeopardizing the security of the United States. This idea became known as the Domino Theory and was the prevailing thought behind much of Cold War foreign policy.

During the 1950s, Senator Joseph McCarthy went on a witch hunt for communists, known as the “Red Scare”. During this time, thousands of Americans were accused of having Communist allegiances. Although Eisenhower did not publicly denounce the Senator, in private he was very vocal to his advisors about the threat McCarthy posed to America’s progress.

On June 29, 1956 President Eisenhower signed into law the Federal-Aid Highway Act of 1956. Ike had effectively ordered 41,000 miles of interstate and defense highways to be constructed, which has become the interstate system we know today.

During the Suez Canal crisis, President Eisenhower sternly warned the British, French, and Israelis to stop their military campaigns into Egypt. When the three countries did not heed President Eisenhower, he threatened each country with severe economic sanctions which caused them to quickly remove their troops. This decisive action saved a much larger military conflict

After the ruling in Brown v. Board of Education desegregated America’s schools, President Eisenhower enforced the ruling by sending in the 101st Airborne Division to aide a group of nine African American students to enter Little Rock Central High School.

President Eisenhower enacted the first civil rights legislation since the Reconstruction Era by signing the Civil Rights Act of 1957. The goal of the Act was to guarantee every individual’s right to vote by utilizing Federal oversight programs.

On July 29, 1958 President Eisenhower signed the National Aeronautics and Space Act of 1958. By creating this agency, Eisenhower catapulted America into the Space Race with the USSR

During these three years, President Eisenhower was able to balance the budget and even create surpluses.

1961 – Warned against the Military Industrial Complex in his farewell address.

On January 17, 1961 President Eisenhower gave his farewell address in which he warned about the United States falling victim to the Military Industrial Complex. He is remembered for this warning, stating that the United States should not allow the arms industry to dictate foreign policy.