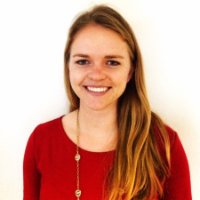 What activities are you involved with on campus? Right now, I’m participating in the Eisenhower Institute Environmental Leadership program, I’m leading an immersion trip to Alabama for the Center for Public Service over Winter Break, and I’ve been on the executive board for Autism Speaks for the past few years. I’ve also been involved with the Garthwait Leadership Center and and the EI Inside Politics program.

How did you become involved in EI? During my sophomore year, I participated in the Garthwait Leadership Center’s Emerging Leaders Retreat, which was working with the Eisenhower Institute. I became more aware of the programs, and I applied for Inside Politics during the fall semester of my junior year. It was an awesome experience, and I really wanted to apply for another program. It was kind of a snowball effect!

What is your favorite thing about the EI program/job you’re currently involved in? I really like that we’re designing our own research projects – we’re going into these communities in Charlottesville that I would normally never get the opportunity to visit. It’s allowed me to tie in my sociology major as well – I’ve been able to relate some of my research topics, like deviance within communities, to the Environmental Leadership program.

What are you most looking forward to/what was the most exciting part of your trip to Charlottesville? I’m not really sure what to expect – I know that Howard’s going to take us hiking, which should be really fun. I’m just excited to see how the communities we visit receive us, and how open they are to our questions. We definitely have a lot of questions, and we’re ready to think critically about how these communities work.

How has EI impacted your time at Gettysburg? The Eisenhower Institute has definitely made me more aware of the power of networking at Gettysburg. So many people that we’ve been put in contact with through EI are so willing and excited to help Gettysburg students. It’s really made me realize the potential that comes with networking. I think public policy can sometimes be written of as being boring, but I’ve made so many connections through it and have been able to relate all of my interests to some aspect of policy.

Who is your favorite president? Abraham Lincoln.

Where do you keep your Ike pin? On my backpack.

If you could take a selfie with one political figure, who would it be? Leonardo DiCaprio – who I’m considering a political figure given his role in United Nations as a Messenger on Peace and Climate Change. I think he would take a great selfie!