Over the past several months, talk of a Trans-Pacific free trade agreement has become increasingly pessimistic, with most policy-analysts and government officials referring to the negotiations as “ambitious,” and the agreement itself as a “lofty ideal.” The rise in U.S. exports since the end of the recession in 2009 has aided our country’s economic recovery tremendously. 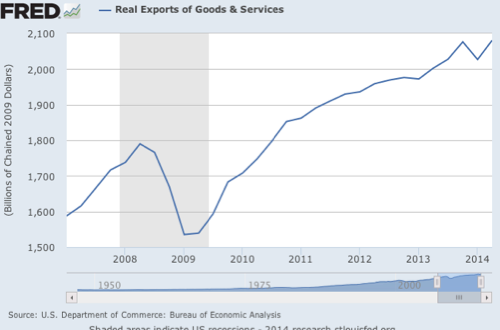 Over the past five years, exports have accounted for one-third of U.S. economic growth.[1] A 57 percent rise in exports to our free trade partners over that same period helped our country reach a record high $2.3 trillion in export goods and services. In the past several years, the Obama administration has been working on two Pacific trade agreements: the Trans-Pacific Partnership (TPP) and the Transatlantic Trade and Investment Partnership (TTIP). The countries included in these agreements produce two-thirds of the world’s GDP and half of global trade.[2] A free trade agreement will likely facilitate even more growth in exports for the U.S. and world economy.

In June, President Barack Obama said he would have a draft for the free trade plan ready by this November to present to the leaders of the Trans-Pacific Partnership countries.[3] In a follow-up article for the Huffington Post in August, Secretary of State John Kerry and Secretary of Defense Chuck Hagel reaffirmed that the President’s economic team would “redouble” efforts to conclude a multi-national partnership at the upcoming G-20 Meeting in Australia this November, which will achieve “tangible outcomes that create jobs and strong, sustainable and balanced global growth.”[4] With November fast approaching, government officials of the other twelve countries are calling for policy transparency from the U.S., fearing their trade aspirations will not be reflected in the policy. Likewise, Congress has become increasingly skeptical of the feasibility and benefits of knocking down trade barriers in the midst of an economic recovery. They worry domestic industries will be competed out of the market if, for instance, tariffs and quotas on sugar from Australia, and textiles from Vietnam are removed.[5]

Politicians hesitate to open up barriers to trade and risk exposing Americans to competition with cheaper foreign labor. Despite our acknowledgement of the logic behind David Ricardo’s principle of comparative advantage in trade, which has delineated liberal economic policy debates since it was first formulated in 1817, policy-makers today fear “carve-outs” in the terms of a TPP trade agreement will give Asian markets an unfair advantage. This is not the first time a lack of political support has threatened to put a stop to free trade agreements between the U.S. and other countries. When NAFTA legislation made it through the House of Representatives in 1993, it was approved by a polarized margin of just 34 votes. The NAFTA vote was also non-partisan, and was passed by a coalition of 132 Republicans and 102 Democrats opposing 156 Democrats, 43 Republicans and 1 independent.[6] From the date of NAFTA legislation approval to 1999, U.S. trade with neighboring countries Canada and Mexico was boosted by 86 percent.[7] In Mexico for instance, automobile sector jobs have increased by upwards of 50% since 1994, and according to one source, their automakers produce approximately 3 million vehicles per year.[8]

Critics maintain there are significant problems with NAFTA as a model for the 21st century, especially with regard to environmental protection policy and international competition amongst agricultural sectors. Yet despite these concerns, policy-makers are not considering NAFTA’s tangible results in discussions about what TPP’s effect on the U.S. and world economy will be. The evidence still indicates the first ten years after NAFTA was a “decade of success” with upwards of 30% growth for Canada and Mexico and 38% for the U.S.[9]

Politicians hesitate to support TPP today for much the same reasons given in opposition to NAFTA. Politicians need to understand what they perceive to be a lofty ideal based on a Ricardian pipe dream has already worked before. Moreover, there are even more political and economic gains likely to be made by a TPP agreement with Asia, especially given our near- total trade parity with China. 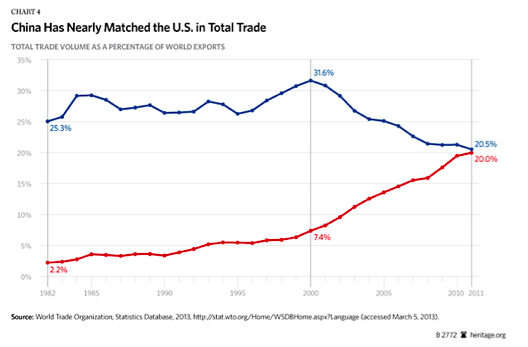 Our “pivot” to Asia must not be misconstrued as purely militarily, and given Chuck Hagel and John Kerry’s plans to strengthen our military alliance with Australia and our presence in their sphere, a trade agreement to strengthen a U.S.-China political and economic alliance is even more urgent.[10] The benefits certainly outweigh the costs of failing to complete a trade agreement with Asia. Despite the urgency, Congress is still slow to consider or even actively pursue a trade consensus with Asian countries like Japan, China, or Thailand. We need to get back on track and support policies that will make U.S. industries more competitive in the international marketplace. Regarding the completion of a TPP agreement, U.S. Trade Representative Michael Froman asserted in a speech given at a recent HSBC event, “It’s challenging, it’s difficult, but achieving it is absolutely critical to getting back on the path towards sustainable growth.” [11]

In this piece, I will not concentrate so much on the debate over the economic virtues and vices of these free trade policies, but the politics halting progress toward their completion. I ask both what Washington politicians’ concerns are, and more importantly, are their concerns genuine? In other words, is politics getting in the way?