“We want to join the institution of marriage,” said Paul Katami, plaintiff in Hollingsworth v. Perry, “not to take anything away, but to strengthen it and to live up to its ideals.”  These words came minutes after the Supreme Court announced decisions on two major cases regarding same-sex marriage, dismissing the case involving California’s Proposition 8, along with finding a major portion of the Defense of Marriage Act (DOMA) unconstitutional.

On Wednesday morning, advocates for same-sex marriage gathered together around the Supreme Court steps, holding hands, cheering, and singing, waiting for the decisions on the Prop 8 and DOMA cases to be handed down.  Over the heads of the crowd flew flags of every type: American, rainbow, peace, and equality.  Supporters of same-sex marriage brandished signs with phrases like “Stop DOMAnating my relationship”, “My religion loves all families”, and “I want to go to my best friend’s wedding”, alongside countless other cries for justice, love, and equality.  Between all the flags and posters were journalists from every news channel.  The cameramen weaved through the crowds attempting to capture the immense emotions that were seeping from the people.   Members from one church gathered together with banners, signs, and t-shirts all emblazoned with the words “Standing on the side of Love.”  The church members held hands and spent the morning singing songs about love and America.  At one point, a young man studying to be a rabbi asked if he could teach them a song.  The street was soon filled with the voices singing in Hebrew.

This was a morning of love and community.  Even though I was surrounded by hundreds of people I did not know, I felt connected to each and every one of them.  Some people had been there all night, while others were just walking by and joined in the waiting and hoping.  It did not matter who you were or where you were from, everyone was welcome.  As 10 o’clock drew closer – the moment the Supreme Court was scheduled to announce opinions – everyone could be seen constantly reloading their Twitter feed and updating their news sources.  Unfortunately, a side effect of having that many people in such close proximity is that the networks tend to jam up.  Only a small fraction of the crowd was able to get the real time updates.  As the space between people could not get any tighter, everyone moved closer to the nearest person with an updated Twitter.   Someone jokingly asked, “Are we actually going to have to wait for the news guys to report this?” A few feet over from the crowd was the news anchors who were waiting anxiously for their interns to come running from the court room with the decisions.  Everyone around those steps knew that a well-dressed young man or woman in sneakers sprinting from the Court with papers in hand meant that their phones would ping in seconds with a breaking news update.

Almost simultaneously, the interns went racing by and the man behind me exclaimed “They found DOMA unconstitutional!”  I repeated this message to the couple in front of me and this game of telephone continued until the entire crowd erupted in cheers.  Flags were waving higher than ever and a chant of “DOMA is dead” filled the street.  Tears were flowing freely and couples were embracing.  Over the next ten minutes, groups of people would burst into screams when a TV camera rolled by them, while the rest of the crowd went back to their phones awaiting the Prop 8 decision.  When the decision to dismiss the case came, the entire crowd seemed to relax.  I saw countless sets of teary eyes just staring at the Supreme Court, thankful for the decisions that were made.  Every one appeared to be letting the realities of the decisions sink in.

The two cases that were at stake were United States v. Windsor and Hollingsworth v. Perry.  In United States v. Windsor, the Supreme Court found Section 3 of the Defense of Marriage Act unconstitutional.  Section 3 of DOMA defines marriage as a union between a man and a woman, effectively blocking same-sex marriage.  Same-sex couples are therefore denied over 1,000 federal benefits, including insurance benefits, Social Security, survivor’s benefits, and joint tax returns.   By striking Section 3 down in a 5-4 vote, the Court gave same-sex couples the right to the same federal benefits that all heterosexual couples are entitled to.  In the majority opinion, Justice Anthony Kennedy wrote that DOMA “violates due process and equal protection principles applicable to the Federal Government.”

Minutes after the DOMA decision was handed down, the waiting crowd learned that the Court had dismissed Hollingsworth v. Perry, California’s Proposition 8 case: another victory for love.  Proposition 8 was a California ballot proposition and a state constitutional amendment passed in November 2008.  It added to the California Constitution that only a marriage between a man and a woman is recognized.  This proposition came after California’s Supreme Court recognized same-sex marriage earlier in the year.  The Court ruled in another 5-4 vote that the defendants, a private group that fought to defend Prop 8 after the government of California refused, lacked legal standing and that the only time both plaintiffs and defendants were properly in a federal court was for Judge Vaughn Walker’s 2010 judgment.  The Court affirmed Judge Walker’s ruling that Proposition 8 was unconstitutional, effectively clearing the way for same-sex marriage to resume in California.

One Wednesday, June 26, 2013, I experienced history in the making.  I stood in the same spot where people throughout history have waited for life changing decisions in cases like Brown v. Board of Education of Topeka (1954), Miranda v. Arizona (1966), Roe v. Wade (1973), and most recently National Federation of Independent Business v. Sebelius(2012).  I joined thousands of people around the nation who fight every day for their voices to be heard in hopes that one day they can marry who they love or attend the wedding of their loved ones.  And not only can they marry, but they will be treated equally under the law as any heterosexual couple would be.

June 26 was a great day for America, but there is still so much work to be done.  Now is the time to build up more cases in order to strike down Section 2 of DOMA, which allows states to not recognize same-sex marriages performed in other states.  Now is the time to work towards greater legislation so that all 50 states allow same-sex marriage, not just the 13 states that have this freedom now.  Only then will the nation truly recognize and accept the message that was echoing on the steps of the Supreme Court on Wednesday: love is love. 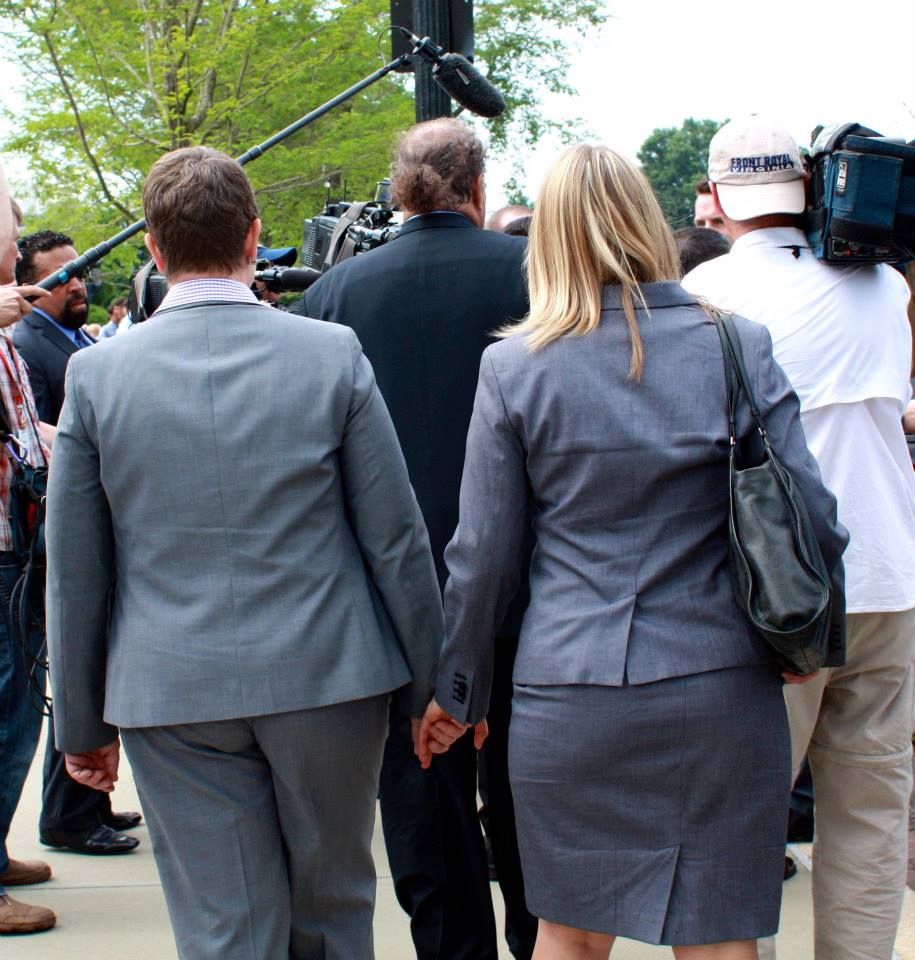 “Kris Perry, whose last name is featured in the Hollingsworth v. Perry case name, and Sandy Stier married in 2004 in San Francisco, but the state Supreme Court invalidated that marriage only six months later.”