On February 10, the Eisenhower Institute’s Women in Leadership Spring 2013 program participants boarded a bus for Washington, D.C. There, they met with Jennifer Lawless to discuss her recent book, Becoming a Candidate: Political Ambition and the Decision to Run for Office, and to chat about her political life experiences. Lawless is an author, an American University professor, a former Congressional candidate, and a nationally-recognized expert on women in politics.

Lawless spoke of the recent success of several women gaining seats in Congress, raising the percentage of female representatives to 20%. At the same time, she mentioned that 91 of the 100 biggest cities in the country are still run by men. Through her research, she has found that women who run for political office encounter little inequality in the voting booth or in the media. Yet, women are much less likely than men to run for elected office.

In 2001, this first caused her to ask the pressing question: Why? After researching the issue, Lawless proposes three possible factors for the discrepancy. The first of these is established gender and family roles, as women are still expected to be responsible for childcare and household responsibilities. Although it is true that children will eventually mature and become independent, it is also true that the political ladder takes quite some time to climb. Lawless recommends that women should “inject” politics into their lives early on, making the balance between their political lives and family lives easier to attain later. The second issue is qualification standards. Many women have the same or similar qualifications as men; however, women are more likely to feel less qualified than men. Women largely do not feel that they are “thick-skinned” enough for the position. Elaborating on this point, Lawless refers to her previous campaign experience and says, “In about two weeks, you will have thick enough skin…you are not the same person you are atthat point as when you decided to run.” The third cause of the difference is political recruitment. Both men and women respond favorably to recommendations of running for office, yet women do not receive such comments as often.

Why does it matter? Lawless gives three reasons for this as well. The first of these is simple justice. She notes that, while women are 51% of the population, they are only 21% politically. They are not accurately represented. The second reason is role models. With such underrepresentation, it is difficult for young women to see and to aspire to such political leadership positions. These role models need to be put in place. Finally, the third reason is polarized parties. Women are more likely than men to push legislation regarding issues which impact women, families, and children.

What should be done first? Lawless’ approach is interesting. There are 435 congressional seats. She inquires, “How difficult would it be to find a woman in each district?” In reference to Mitt Romney’s much-ridiculed comment during the political debates last fall, “binders full of women” may actually be effective and beneficial to the cause. Qualified women should be sought out and vouched for.

In conclusion, Jennifer Lawless says, particularly in regards to the media, “It’s about exceeding expectation—not so much about winning.” 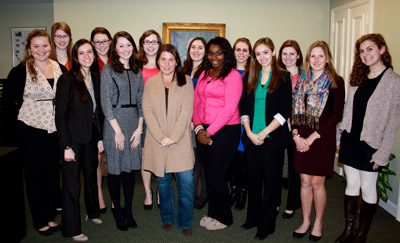